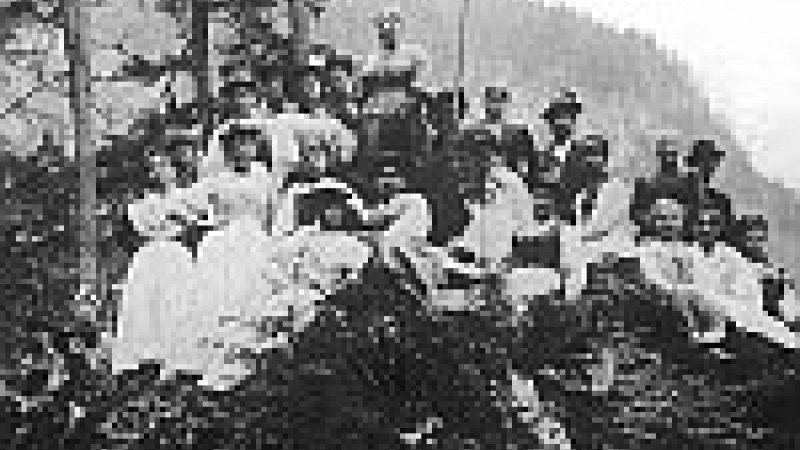 In the Echerntal near Hallstatt is the outstanding natural monument the "Gletschergarten ", or glacier garden, which was discovered in 1926. The Hallstatt glacier garden is a relic of the last Ice Age, whose glaciers receded 12,000 years ago. The Dürrenbach is a torrent which only carries water from time to time and fl ows into the Waldbach, but in strong rain or when the snow is melting, within just a few hours it can contain extraordinarily large amounts of water and then in just a short time be dry again. Over the course of time, the plummeting waters of the Dürrenbach have formed attractive basins in the Dachstein limestone of the bed of the stream. Such "glacial kettles" have arisen as a result of thousands of years of erosion by spherical shaped stones on the cliff base of karsts and glacial streams. The path leads on from the lowest point of the glacier garden to the old "Franz-Josef Bridleway" and thence to the Malerweg (painters' route) in the base of the valley. How old is the glacier garden? To complete our picture of how the glacier garden was created, it is also interesting to consider just when the glacial kettles were formed. Around 2 million years ago during the Quaternary era the climate deteriorated. Several phases of Ice Age (Glacial) were interrupted by moderate warm periods (Interglacial). The last great Ice Age (Würm) began around 80,000 years ago, and around 18,000 years ago the glaciers fi nally began to recede from the Salzkammergut, interrupted by short periods of advancing. Around 12,000 years ago only the glaciers of the central Dachstein plateau still reached the floor of the Echerntal a short outcrop. It was around this time too, or shortly after it, that thegreat rock falls of the Echerntal (such as the "Kreuzstein", the rune stone etc.) took place and covered the Ice Age deposits.

Thus the Hallstatt glacier garden at least 12,000 years old. "In mighty folds the Düren rises with its chalky Düren streams. With fearsome beauty it rises against the black back of a pine forest, from whose heights a silver brook foams out. On the right you can see into the chasm of the maple wood, and on the left stands the bleakest of the thousand foot high Hierlatz before you. One turns in circles here as if seized by the hand of a fairy, and looks to see whether what one is looking at is enchantment or reality." (Joseph August Schultes: Travels through Upper Austria). In 1886 the Austrian Alp Association decided to expand the existing path leading from Hallstatt to the Simony hut into a bridleway. They wanted to make the Simony hut and the Dachstein accessible to everyone. The path covers a total length of 12,110 metres. The new bridleway was named the "Franz-Josef Bridleway"after the Emperor.

It was offi cially opened on 8th September 1890. Many residents of Hallstatt and numerous guests of honour were present for this ceremonial act, which was of great signifi cance for the future tourism of the Alpine region. In 2006, when the theme trail was being developed, the lower part of the bridleway was renovated, partly along the old route. The original bridge across the Wildbach (Dürren) was restored.