The cave Hirlatzhöhle in the Dachstein mountains

In 1971 Hirlatz Cave was put under special conservation because of its special scientifi cimportance. It offers an excellent view of underground karst water passages. These can often be followed for longer distances in many parts of the cave. The formation of clay can frequently be observed in the cave. Due to the low temperatures in underground passages close to the cave entrance Hirlatz Cave turns into an attractive ice cave in the winter months. Further cave exploration is becoming increasingly time consuming due to the large distances that have to be covered underground. The presently known passages extend from the level of Lake Hallstatt up to 1.600 metres above the lake. The cave leads deep into the plateau; it stretches from Rauerkogel in the east to Grünkogel in the west. Cave explorers of the local caving club Hallstatt-Obertraun have spent altogether more than 18,000 hours in the cave in the last half century. As a result Hirlatz Cave is Austria's longest cave with more than 95 kms of surveyed underground passageways.

The Dachstein mountain - Cradle and Centre of Austrian Cave Exploration

The Dachstein massif with its 320 presently known caves is one of the biggest limestone areas in Austria. It is from here that important impulses for cave documentation and scientific speleology have come. Drawings (at about 1800) and copperplate prints (1649) of Kessel and Hirschbrunn - two karst springs on the southern shore of Lake Hallstatt - show an early interest of the local population in springs and caves.

The Hirlatzmassif is the furthest northern part of the gigantic Dachsteinmassif. The whole mountain mainly consists of triassic Dachstein limestone. The peaks of the Hirlatzmassif reach a height of almost 2000 metres above sea level.

The entrance to Hirlatz Cave can be seen clearly from the Echerntal in Hallstatt. It is situated 400 metres above the valley. The cave was first explored in 1949 by Karl Pilz, Georg Lackner and Franz Voggenhuber from Hallstatt.

Past beautifully designed information boards. On the trail of naturalists and landscape painters. Short and easy, but hugely rewarding and interesting themed hike. Walking time for the circular hiking trail: 3 - 4 hours. Enjoy the "Themed trail Hallstatt Echerntal" in Hallstatt. 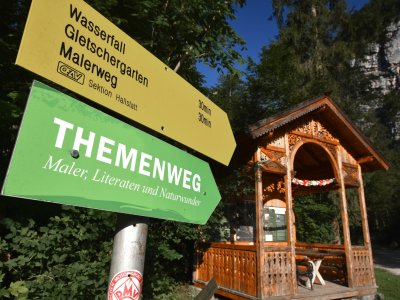